You are here SNOW GLOBES AND ADVERTISING - Henri Bendel

Henri Bendel’s snow globes. A fashion icon who for years created his own models to decorate the chicest Christmas. You will love them!!!

A beacon of luxury 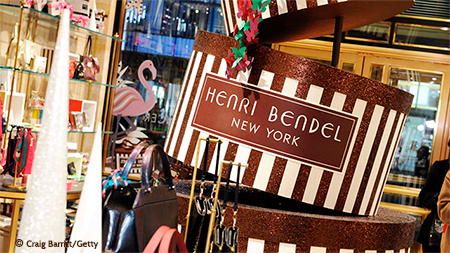 Henri Bendel is not a popular brand in Spain, however for more than a century it was a paradigm of fashion and elegance in New York and therefore in the world. It was founded in 1895 by Henry Bendel, a businessman with a special talent for marketing. To him we owe department stores and sales, as we know them. From a store in Greenwich Village, which came to be considered a “beacon of luxury,” HB was the first fashion retailer to establish itself on New York’s upper Fifth Avenue. For many years this shop was a must for fashionist if only to admire its famous window displays.

Brown and white stripes on their bags and hatboxes were for many years an icon of fashion, good taste and purchasing power. In the 1930s, the composer Cole Porter immortalised the brand by including it in one of the verses of his famous song “ You are the top“ (you are a Bendel bonnet, you are a Bendel cap).

For years, Henri Bendel produced one or two models of snow globes that were sold in his shops at Christmas season. They never lacked their brown and white stripes and almost always featured a “Bendel girl”. “Chic”, glamorous, fashion-conscious, slim and, of course, with enough money to buy luxury. HB also innovated in snow globes. Many of his creations are considerably larger than traditional snow globes (some are up to 23 cm high), and are usually “domes” (oval-shaped). Sometimes they had a built-in music box.

Today, these snow globes are collectors’ items that have been revalued following the demise of the brand. You can find them on almost every vintage collecting and on many second-hand sites. Not affordable prices range from $250 to more than $600.

In the 2008 creation we see a “Bendel girl” walking her bags through the intersection of Fifth Avenue and W58 in New York City with her pet who, of course, is wearing a brown and white striped coat. The total height is 53 cms. The melody of his music box is the well-known one “ Fly me to the moon “. At the time of writing this post, it is in Ebay for $ 549.99.

In 2009, Henri Bendel recovered the spherical format in XXL size (18 cm high). The protagonist is a young traveller wearing sunglasses, surrounded by balls and suitcases from the brand and her pet in her bag. The melody is “ What a wonderful world “. It is also for sale at Ebay

On “Singing in the rain” (2011) the protagonist, under a “Henri Bendel striped” umbrella, walks past a typical New York red fire pump with her dog. They are surrounded by some of the city’s most emblematic buildings. I think it is the model I like the most, perhaps because it brings together a city and a song that I love.

Not always the protagonist of Henri Bendel’s snow globes was a “Bendel girl”. The New York skyline, dogs or imaginary figures had their place. For many years the brand also produced snow balls to hang on the Christmas tree which have also become collector’s items.

The Henri Bendel’s snow globes have served as inspiration for illustrators and designers who have interpreted them and created their own works based on them. This is the case of JL McKoy or ER Miller a fashion illustrator who in recent years has become very popular thanks to her coloring books and above all her collections of “cut-outs”. 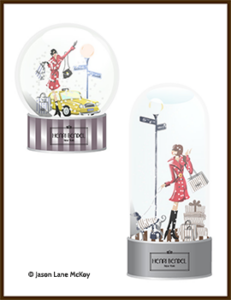 In January 2019, Henri Bendel closed its 23 shops and its website, leaving behind more than a hundred years of luxury fashion. His snow globes, increasingly hard to find, are also part of fashion history.

Here you will find more posts dedicated to snow globes and advertising.

The title image is an in-house creation featuring the model of snow globe created by Henri Bendel in 2013.

I’ll be happy to receive your comments. And if you liked this post, share it !!! Thank you very much for visiting QueNieve

This site uses Akismet to reduce spam. Learn how your comment data is processed.

You can find out more about which cookies we are using or switch them off in settings.

This website uses cookies so that we can provide you with the best user experience possible. Cookie information is stored in your browser and performs functions such as recognising you when you return to our website and helping our team to understand which sections of the website you find most interesting and useful.

Strictly Necessary Cookie should be enabled at all times so that we can save your preferences for cookie settings.

If you disable this cookie, we will not be able to save your preferences. This means that every time you visit this website you will need to enable or disable cookies again.